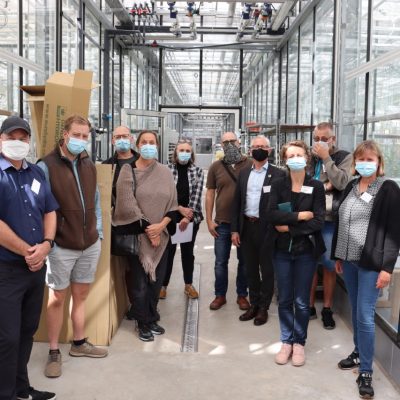 On September 02, 2020, despite the still ongoing corona situation with all its restrictions and conditions, a study trip of a Danish delegation, led by Hilary Karlson and Mette Jorgenson from the Bio-Economy Hotspot Guldborgsund, could be carried out in the Interreg Project Umbrella, while adhering to strict hygiene measures.

This micro activity was organised thanks to the Umbrella project partner from Denmark – Guldburgsund municipality.

Aim of the study trip was the aquaponics research facility FishGlassHouse of the University of Rostock, which is used in the AquaVIP project, and the Pommerehne GbR in Lüchow, Altkalen, which intensively operates the concept of the circular economy.

After an introductory lecture regarding the chair of Aquaculture and Sea-Ranching at the University of Rostock, with its competences and research directions as well as the thematic integration into the Interreg project AquaVIP, the FishGlassHouse was visited and the existing technologies, the cultivated fish and plant species and the synergetic use of energy and nutrients were intensively discussed.

After a short lunch, the group went to the Pommerehne GbR, located about 60 km south-east of Rostock, to take a closer look at the practiced concept of the circular economy. The Pommerehne GbR owns, besides an agricultural area of 800 hectares, three own biogas plants, which provide the electrical and thermal energy for the operation in addition to feeding electrical energy into the power system. In addition to pig fattening and breeding, the farm also has two separate aquaculture recirculation systems, which produce a total of 550 tons of African catfish annually and slaughter, process and partially refine them in the farm’s own facility.

In addition to the use of the energy produced, nutrients, water and part of the carcasses of the fish are reused on the farm in order to implement the concept of circular economy in the best possible way for the farm.

After the approximately 2-hour tour, the delegation said goodbye and made their way to the Baltic Sea ferry from Rostock to Gedser. Onboard the ferry, the participants of the study trip used the opportunity to review the impressions gained in intensive discussions and to consider potential uses.